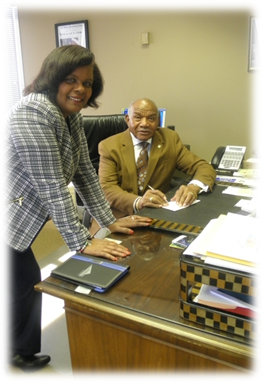 During the past four decades, Dikita Enterprises has survived three economic downturns without laying anyone off due to financial reasons. Dikita has designed and/or managed over a billion dollars in projects including transit, aviation, transportation, schools (K-12) and universities, infrastructure, municipal facilities, water resources as well as sports and entertainment complexes.

Founder, Lucious Williams says, “Part of the reason our company has survived through some tough times is because we learned to diversify early on.” Dikita, which started out as a civil design firm, also provides planning, transit data collection, and program/construction management services. “2001 was our worst year ever. It started out weak and then worsened when all of our airport contracts were frozen because of the September 11th terrorist attacks. We had to concentrate on other markets, like education and public transit. Fortunately, my daughter and I had saved for lean times, and were able to continue to pay our employees while we only took one-month salary that year.”

Lucious hired his daughter Eve, Dikita’s current President and CEO, before she graduated from college. “I computerized the financials in 1986, before desktops were popular,” says Eve, who earned a BBA and an MBA degree in accounting and information systems. “I brought the first computer to the company, my graduation present. We have been a great team over the years, with Dad’s engineering and business development experience, and my financial and management knowledge.”

Sponsored by the Asian American Contractors Association of Texas (AACATX), this annual award is presented annually to the most supportive strategic partners of AACATX or its members.

Sponsored by The Dallas Business Journal, this annual award recognizes Dallas businesses for their rapid growth and contribution to their successes and growing business ventures.

Baylor University's Institute for Family Business conferred this award on Dikita in recognition of the firm as a successful family business that demonstrates rapid growth over a short-period of time and has implemented innovative business techniques in achieving this growth.

Medium-Sized Contractor of the Year

The Black Contractors Association (BCA) presented this award to Dikita in 2011 in recognition of our reputation for delivering quality services across a variety of industries.

Entrepreneur of the Year

Sponsored by Ernst and Young, Merrill Lynch and INC. Magazine, the Entrepreneur of the Year Awards highlight the individuals and companies whose ingenuity, hard work and innovation have created successful and growing business ventures. Mr. Lucious Williams, President of Dikita Engineering was nominated for this prestigious award in both 1992 and 1993.

Dikita Engineering was honored with the Dallas 100 Award. Sponsored by the CEO Institute and the Caruth Institute of Southern Methodist University, this annual award recognizes Dallas' 100 fastest growing private companies for their rapid growth and contribution to the local economy.

The Juanita Craft Foundation annually awards for the contributions of businesses and business people to the community. In 1991, Mr. Lucious Williams received the Juanita Craft Award for Business Achievement.